Logos frequently provide at least the initial basis for deal toy ideas, but many logo-inspired design options still tend to be overlooked.

After all, however complex or simple they might ultimately be, the perceived value and cachet of deal toys lies in their distinctive design elements; and logos, because they are by definition distinctive, offer a ready source of deal toy ideas.

The problem is that many bankers (understandably) may not recognize the full range of techniques available for a logo-themed design.

And because logos are again by definition unique, they are all different—and therefore tend to lend themselves to different design techniques and effects.

Also, some of the techniques lend themselves to certain materials more than others. This will also be emphasized in considering these effects.

This post is intended to give those bankers and others a feel for some of the many techniques through which logos could most imaginatively and effectively be used as the centerpiece for a deal toy design.

Deal toy featuring a logo mounted on a wood section.

7 Deal Toy Ideas Highlighting Your (or Your Client’s) Logo

Contour designs make use of all or part of a logo in the outer edge of the design.

Here again, not all logos will lend themselves to this type of technique; but when used with an appropriate logo, the technique can result in some fairly compelling logo-themed designs.

Importantly, this kind of effect can be rendered in a number of media, including both crystal and acrylic (Lucite), as shown in the examples below.

Contour design featuring the leaf icon in the HomeTown logo. This material here is acrylic (Lucite). 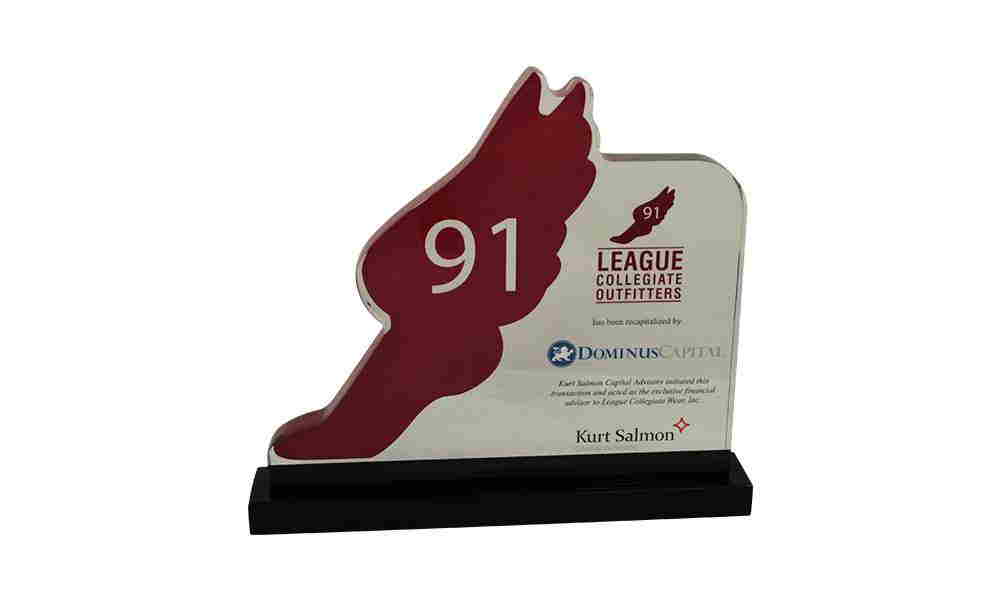 Another contoured crystal design, this time making use of only part of the logo.

Incorporating a spinning element is another effective strategy for showcasing a logo in your deal toy design.

Please note that this is not suggested for crystal designs, but only for those in acrylic (Lucite).

The deal toy examples below are all Lucite designs. 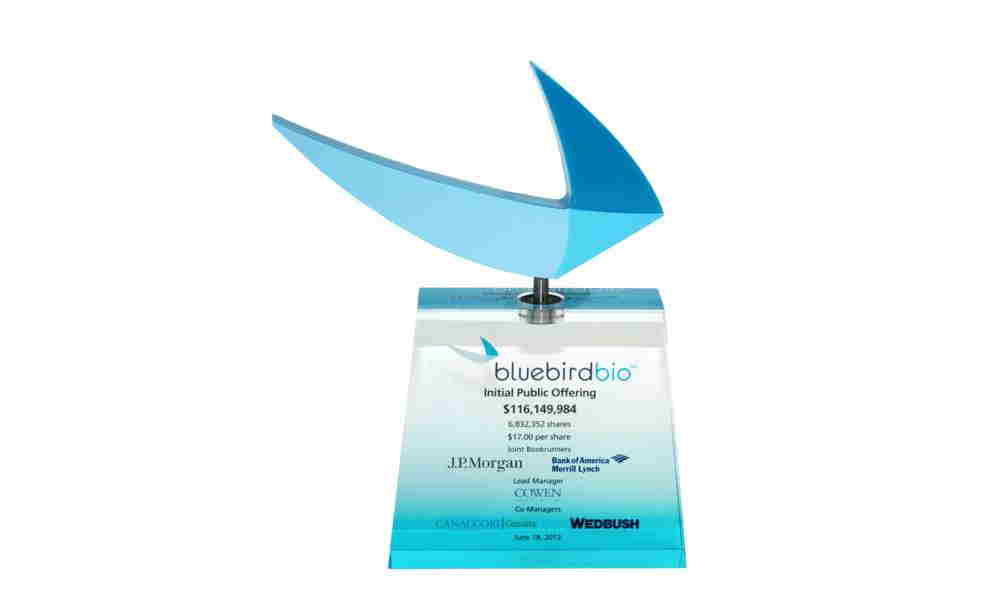 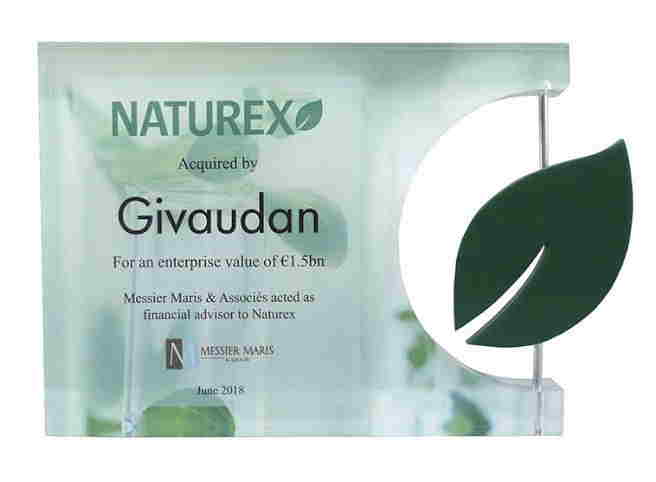 Here again, the icon portion of a logo has been used in this Lucite tombstone. 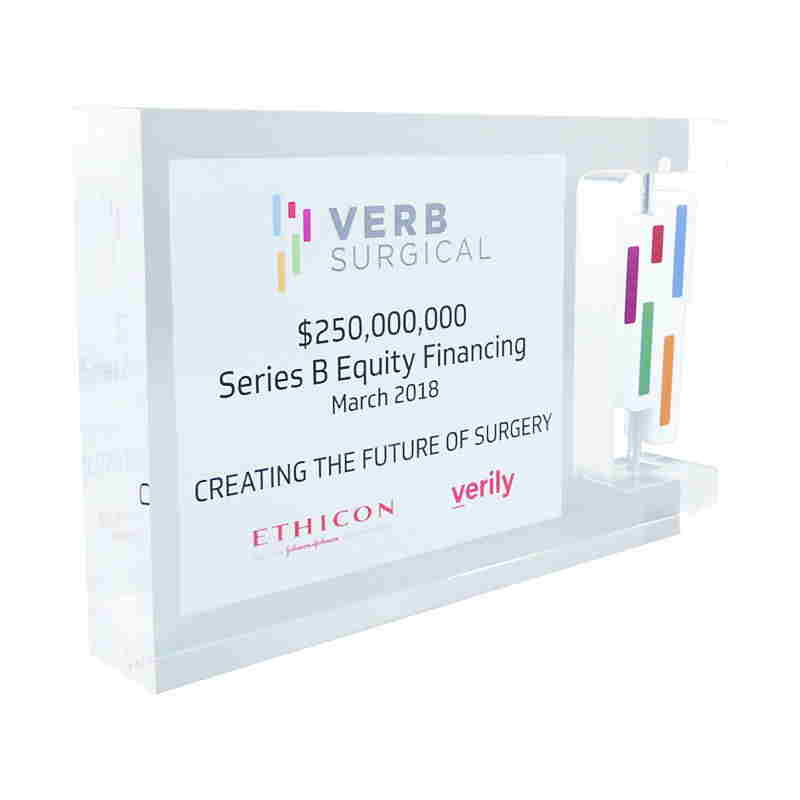 Use of a spinning element with a vertically-oriented logo icon. 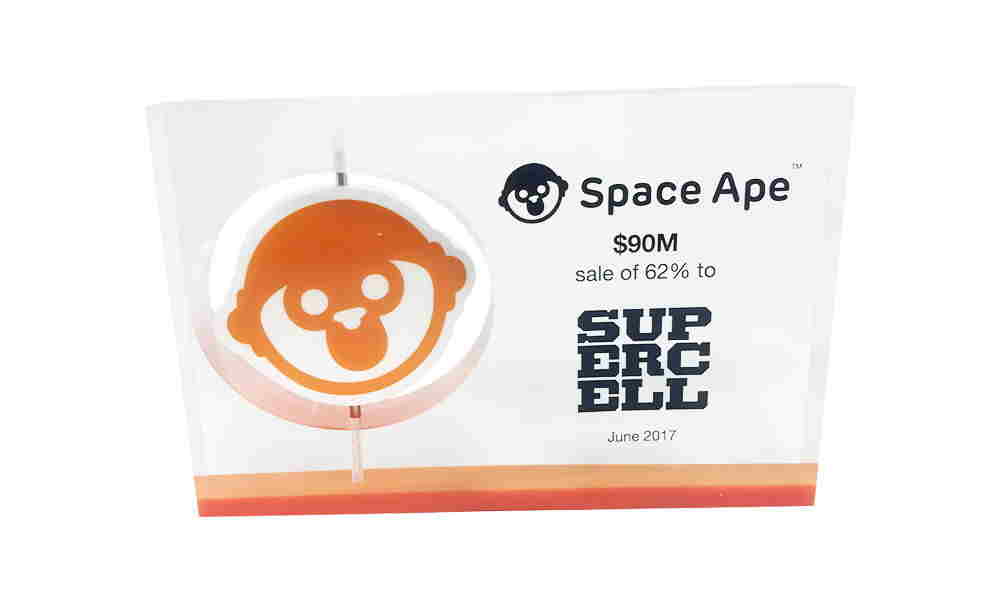 An example of a spinning element incorporated via a recess. 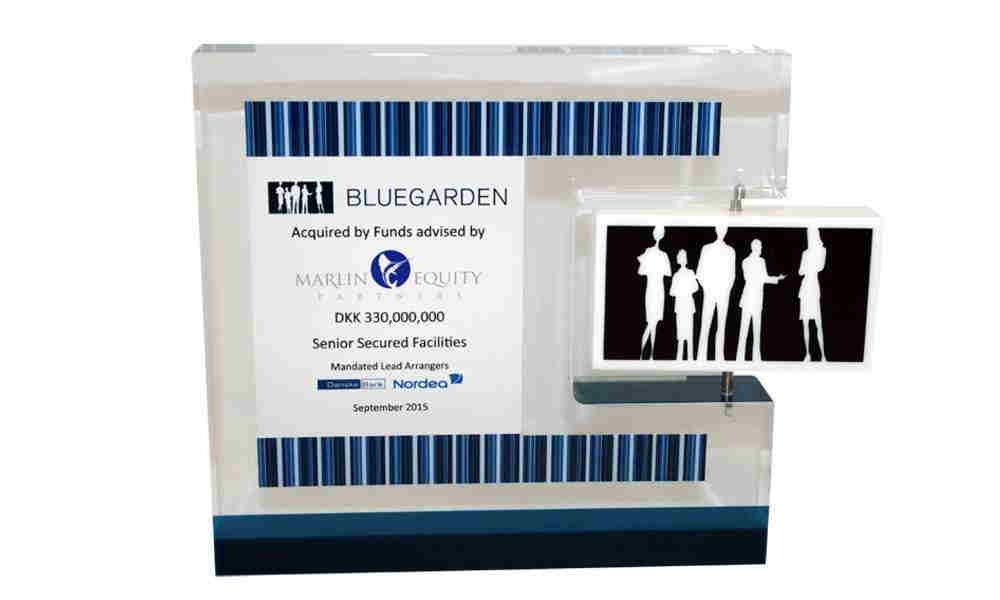 In contrast to the Verb Surgical design above, this Lucite tombstone incorporates a horizontally-oriented logo icon in its spinning element.

In these designs, as the name implies, the deal toy shape follows the lines of the full logo shape.

Designs of this sort can be rendered in a variety of media, including both crystal and Lucite. 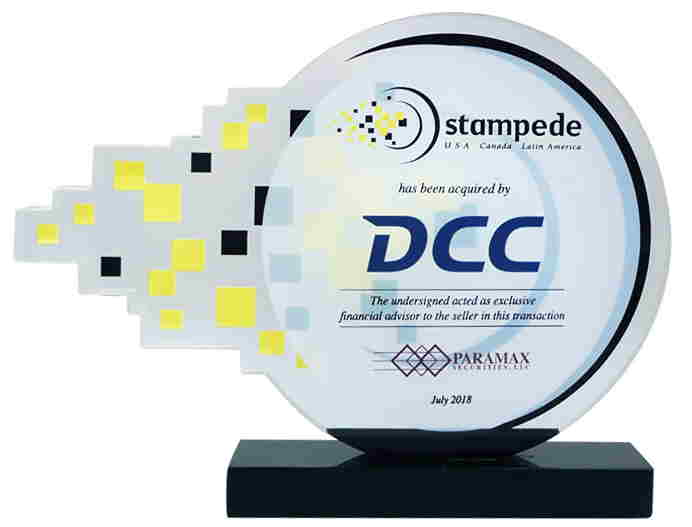 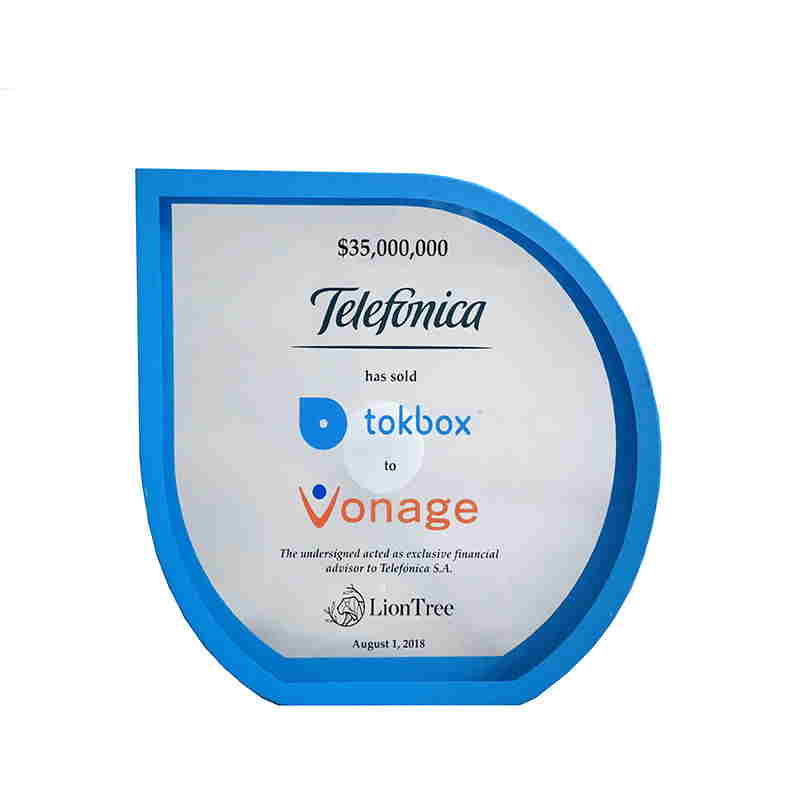 Relatively simple design that makes use of a shadow box to replicate the logo shape. 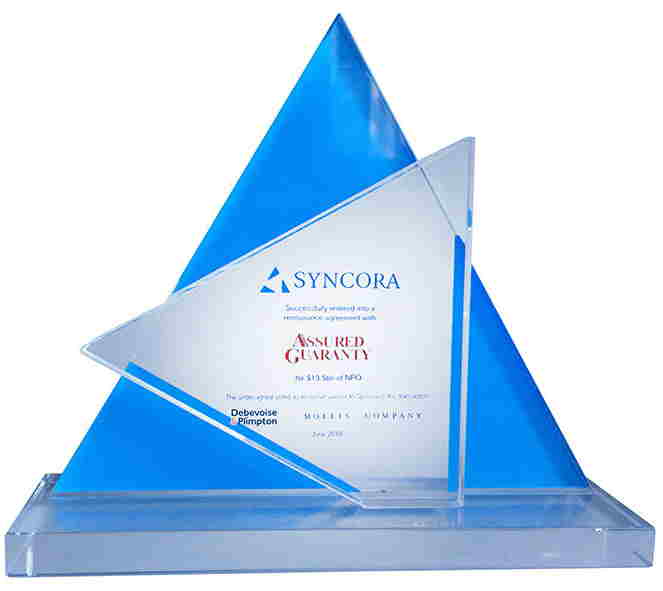 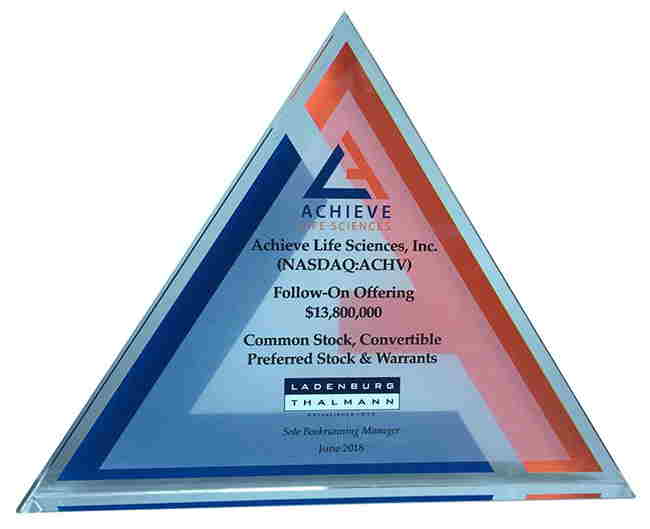 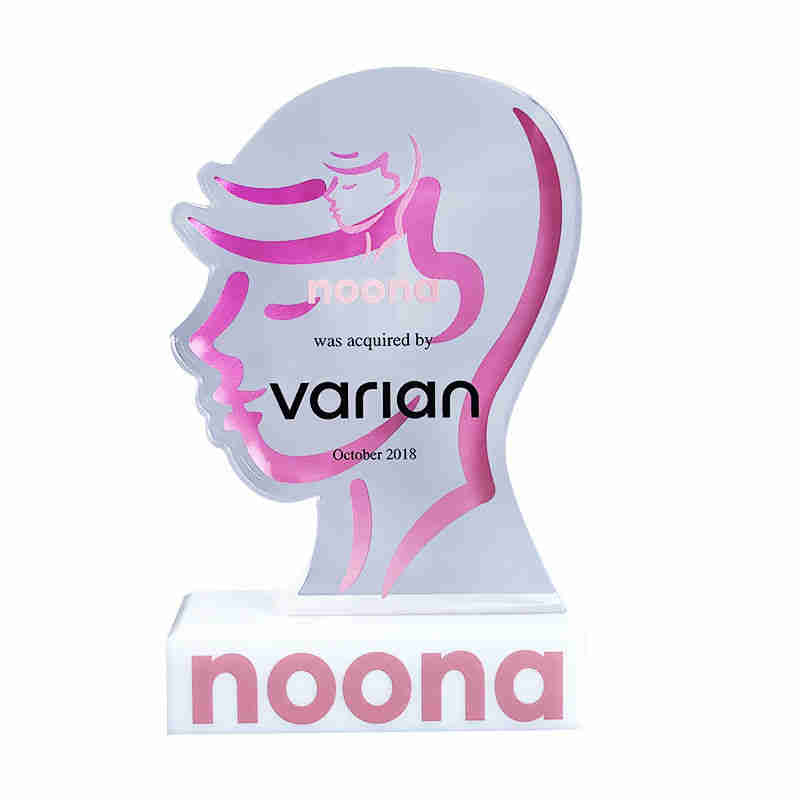 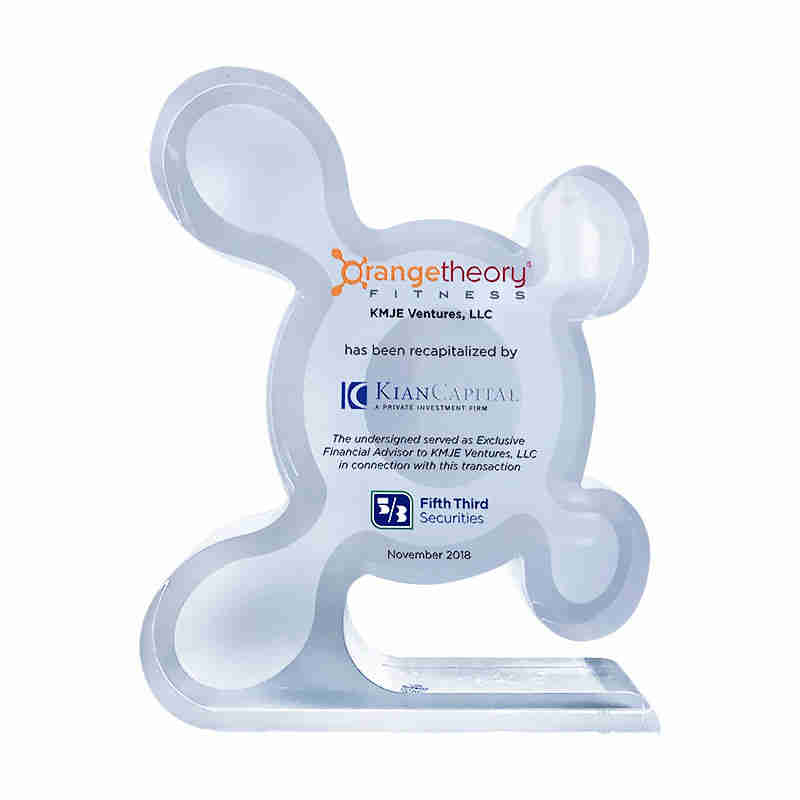 The logo of the Orangetheory Fitness chain—which mimics the shape of a fat cell—is followed in this crystal deal toy design.

Cut-out designs feature a freestanding element of the logo–typically the icon portion.

This type of design is fairly common, and can be rendered in a variety of media, including both crystal and Lucite.

The deal toy examples below are both crystal, Lucite, or, in the case of the piece directly below, metal.

The deal toy design above makes use of cut-out metal letters to enliven an all-text logo. 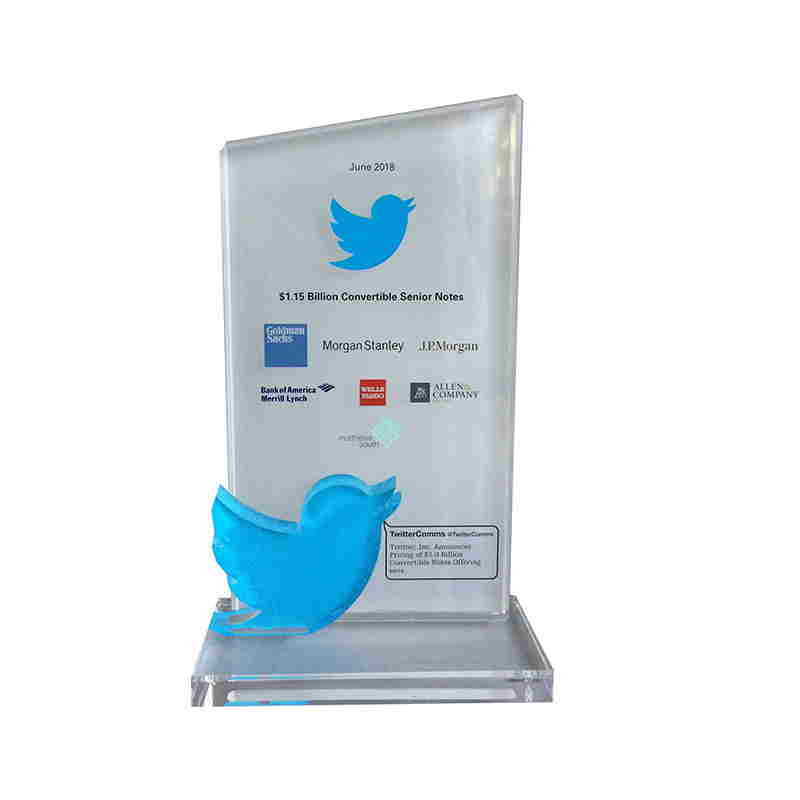 Crystal witter deal toy featuring a crystal cut out of the logo icon. 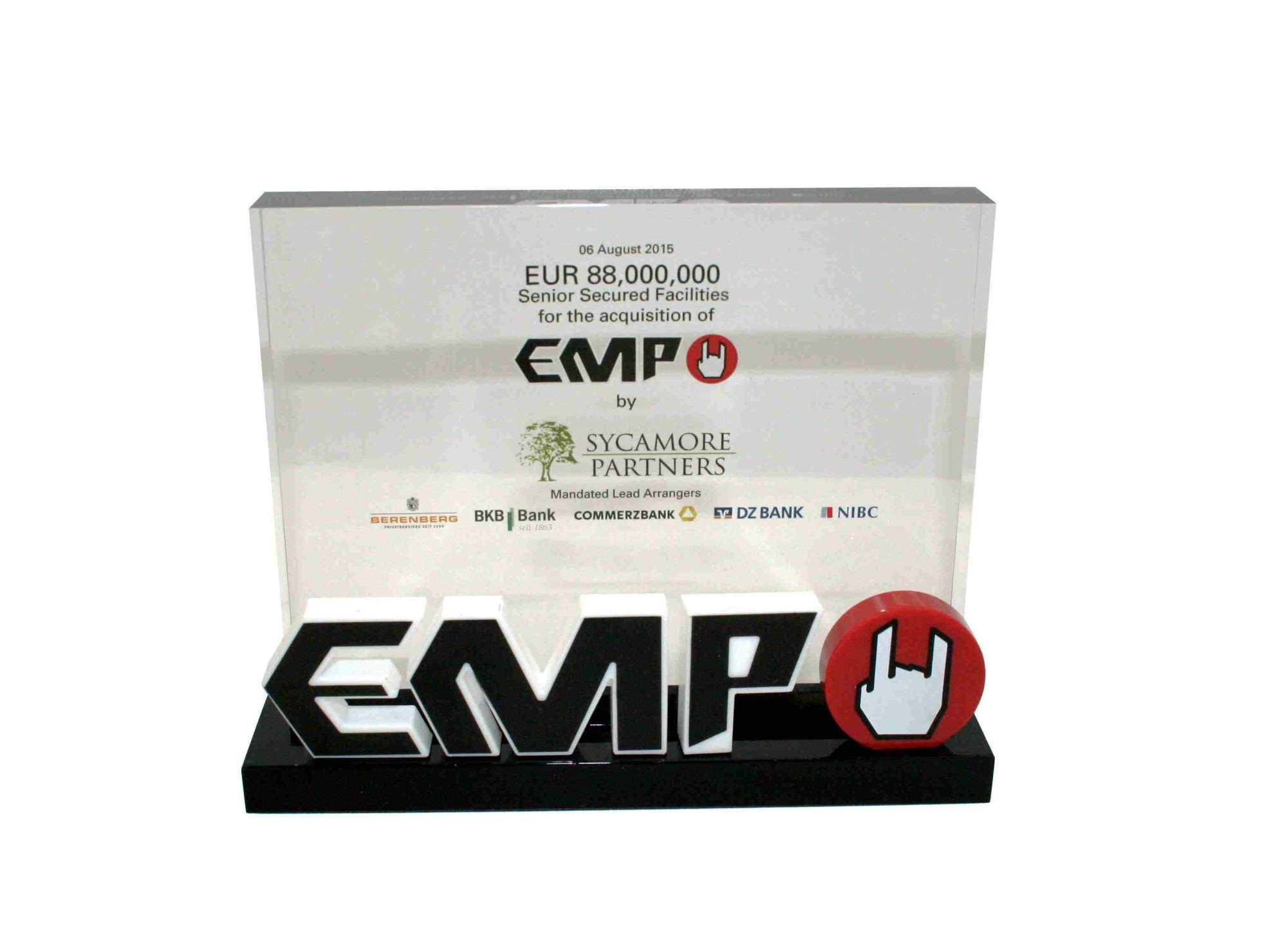 Deal toy featuring cut-out of logo, this time in acrylic. 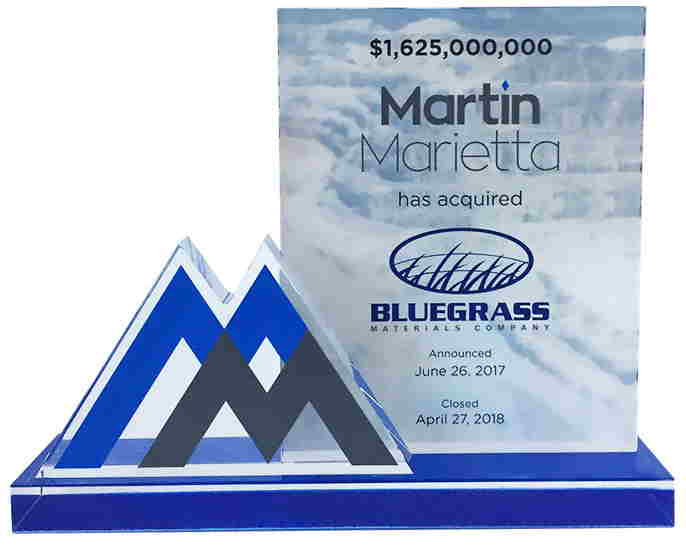 Another example of a Lucite cut-out of a logo icon. 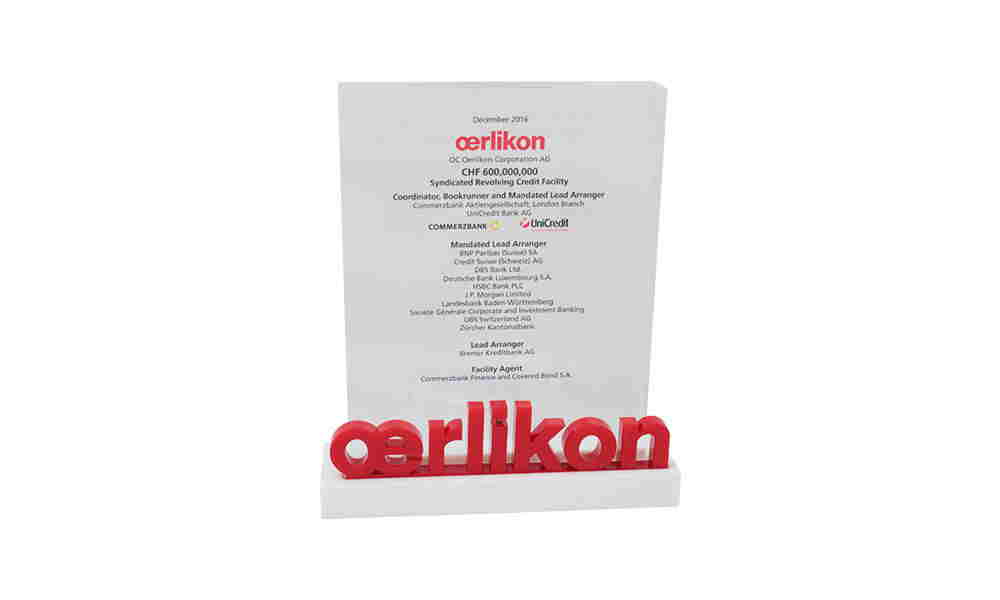 As mentioned previously, certain deal toys designs, such as those featuring spinning pieces, are associated only with Lucite.

On the other hand, 3-D etching, also known as “internal etching”, is a technique used only with crystal.

One of the limitations of crystal is that objects cannot be embedded, or placed inside, as they can with acrylic. Though no physical object is actually placed inside the crystal, the 3-D lasering effect simulates just that. 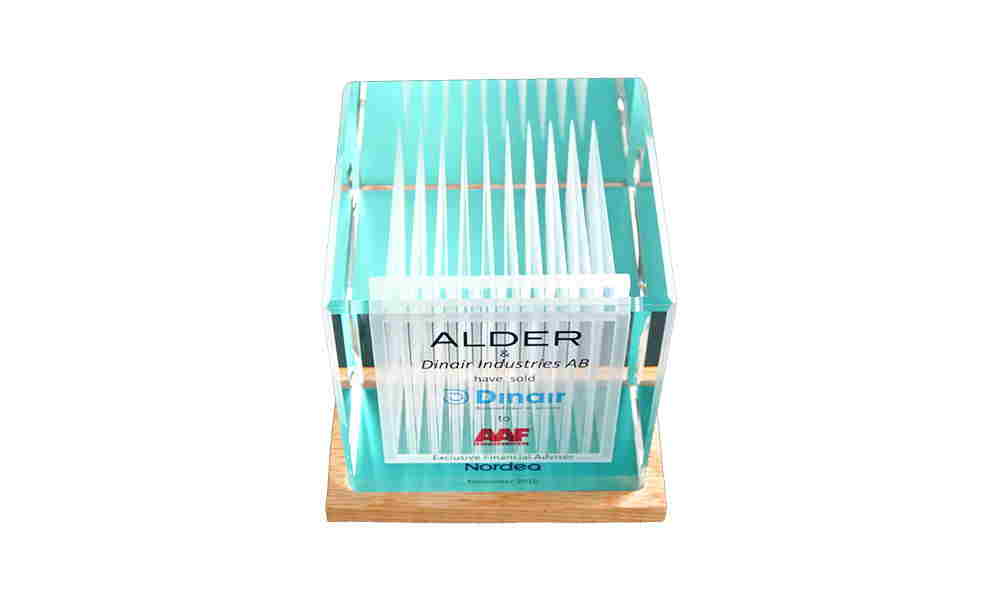 Top view of crystal capturing how 3-D etching simulates the actual placement of an object inside crystal—something that cannot be done. 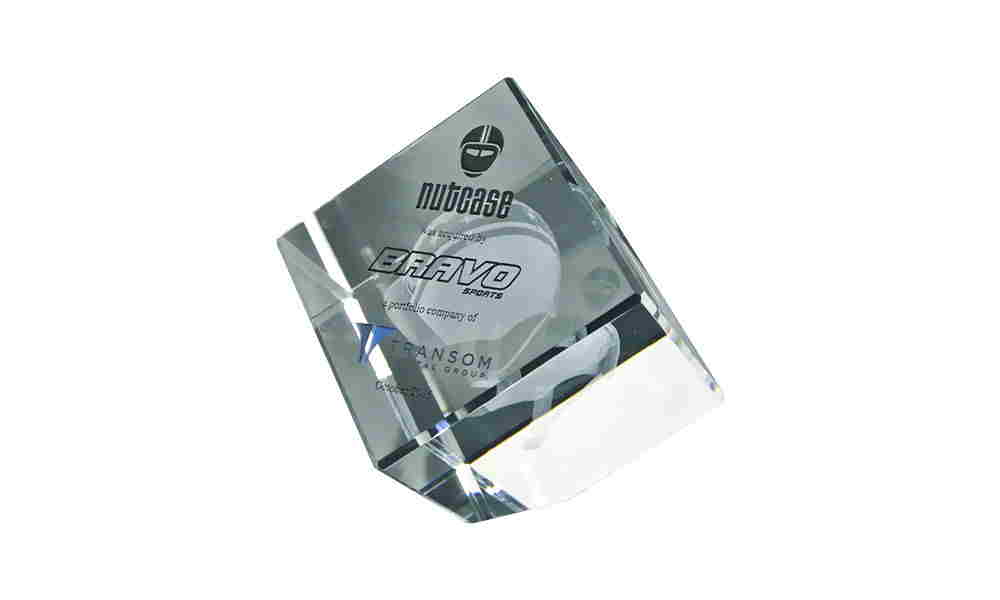 3-D etch effect making the helmet portion of the Nutcase logo appear to be embedded. 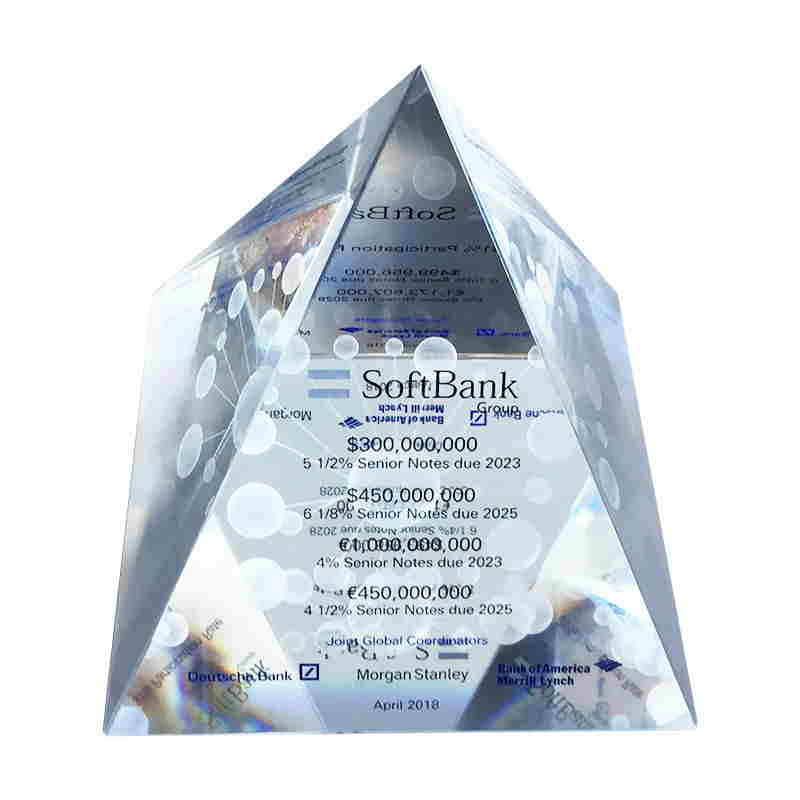 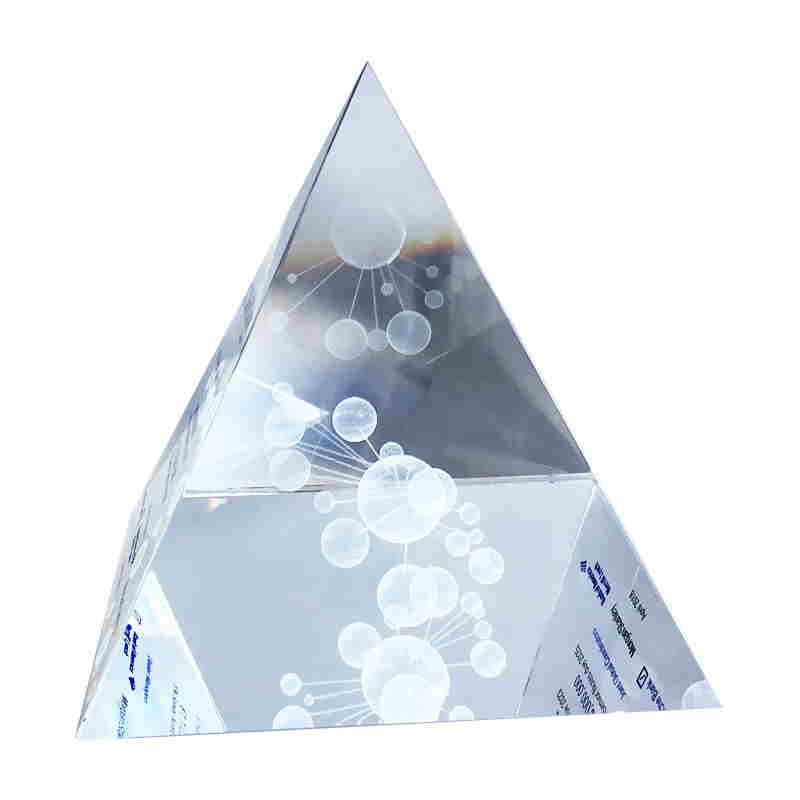 Side view of the same piece, clearing showing the 3- D etched elements.

This technique involves exaggerating what is usually already a dominant element in the logo.

Here again, not all logos will have elements that lend themselves to this kind of design. 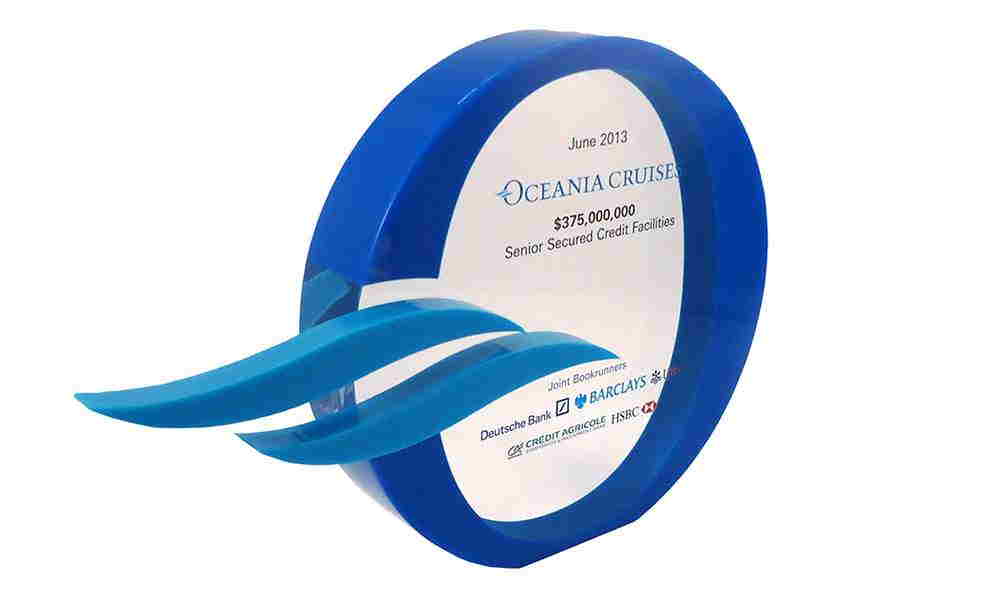 An acrylic tombstone design making use of cut plexi to amplify the logo’s “waves”. 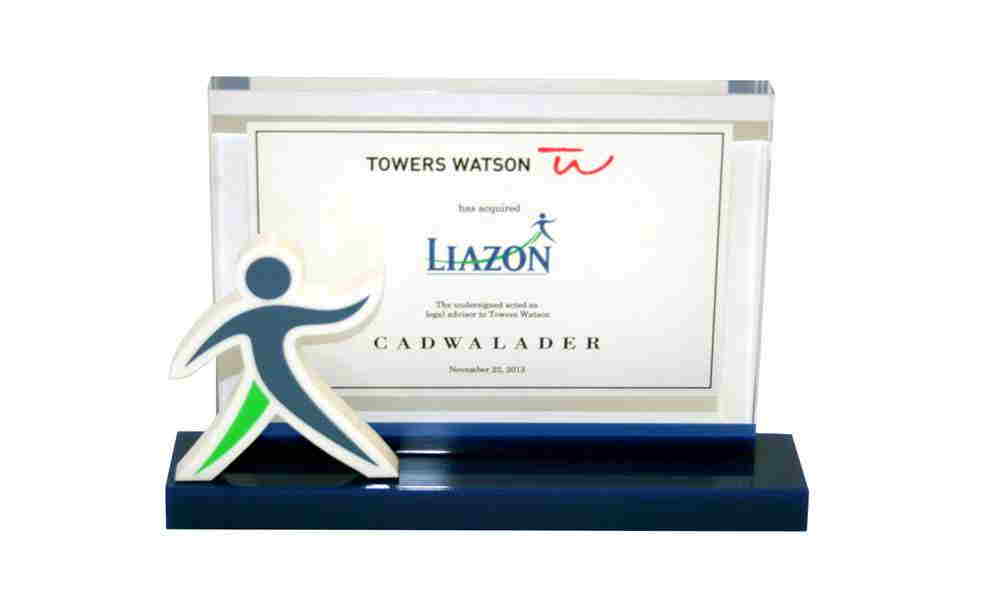 Here again, a feature of the logo is isolated and showcased with cut plexi. 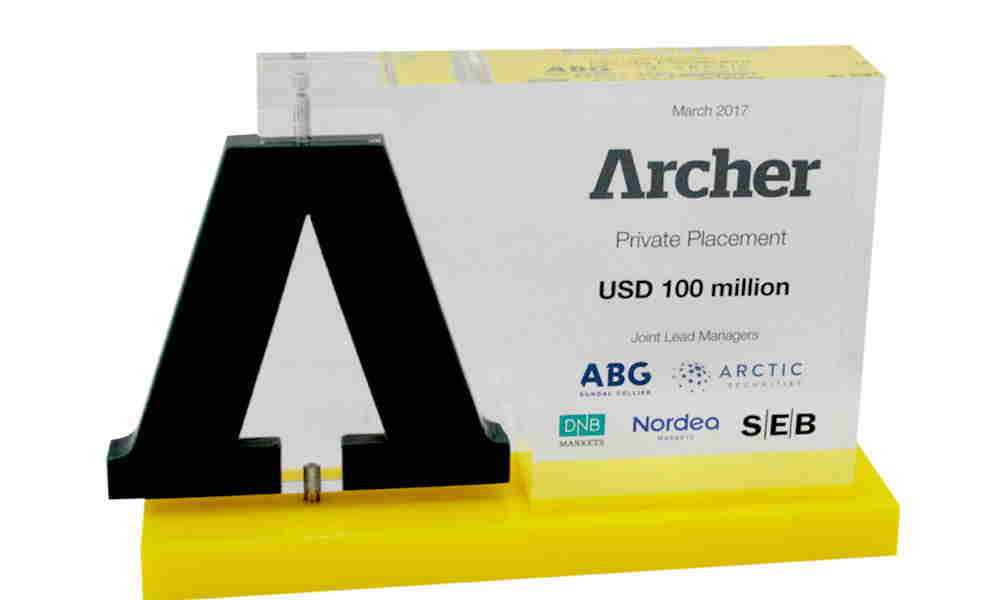 Here a spinning element is used to showcase the logo’s stylized “A”. 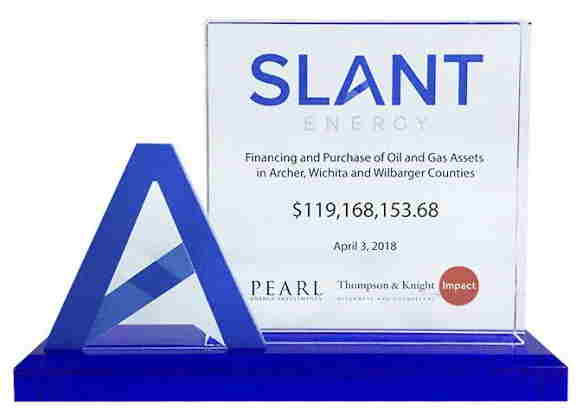 A crystal tombstone playing off an element of a logo.

Another view of the wood, logo-themed deal toy shown above.

The laser etching process can be used to achieve a number of effects. These include the use of laser-cut plexi, and clear-cut and deep etching. The more common standard etch technique is also illustrated below.

Again, the most commonly used technique, which you most likely have seen, is standard laser etching of a logo, such as shown here on both the back and base of Purcari tombstone below. 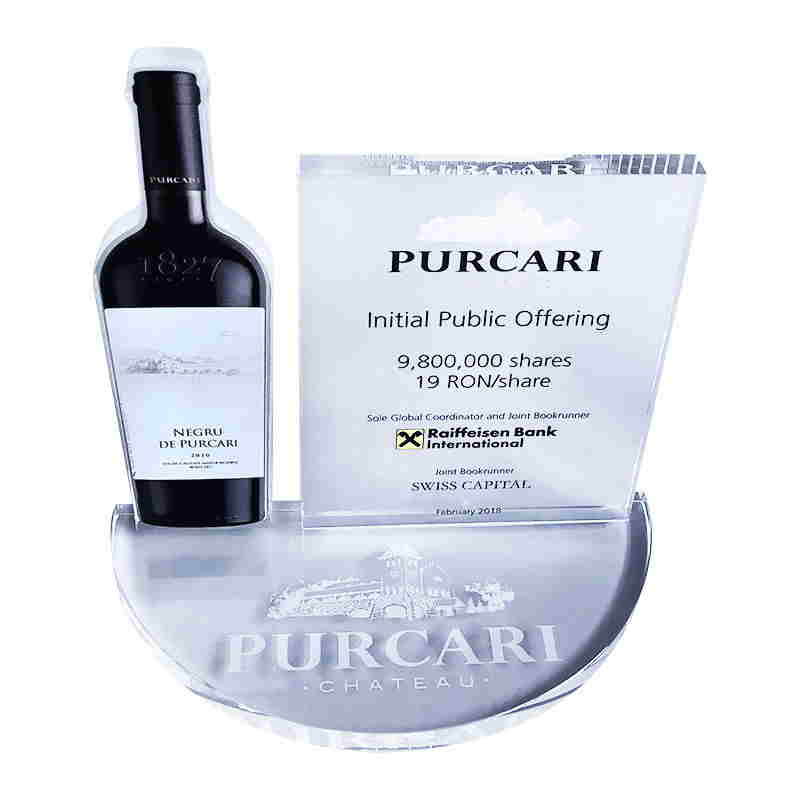 The most common laser etching technique is shown here on both the base and back of the piece. This is known simply as standard etching. 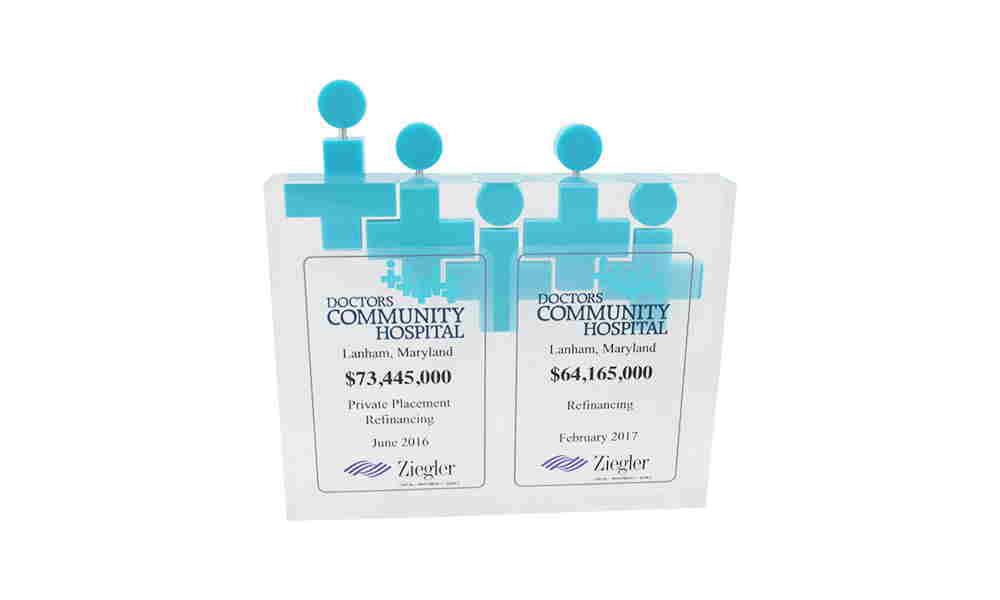 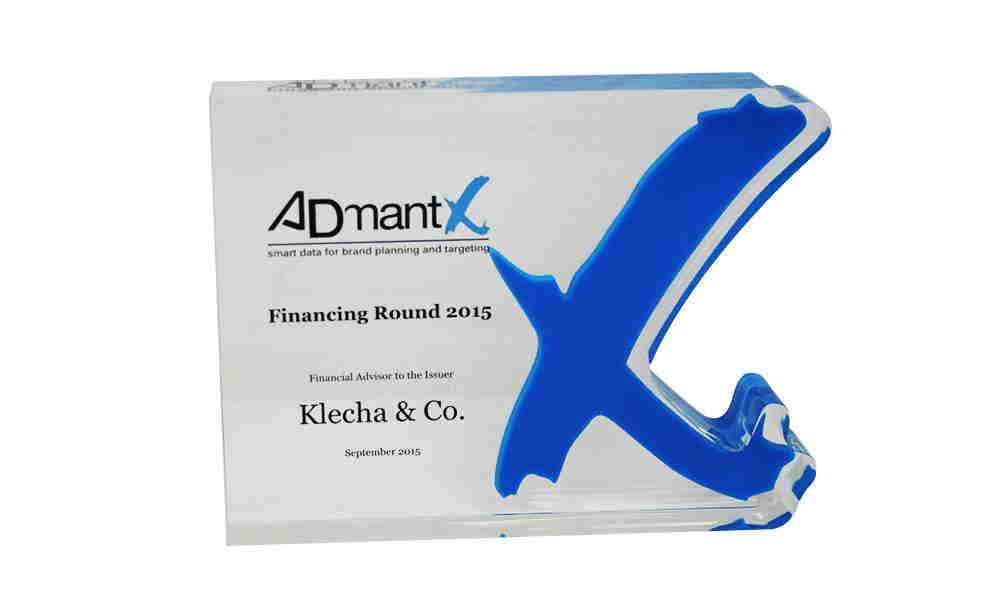 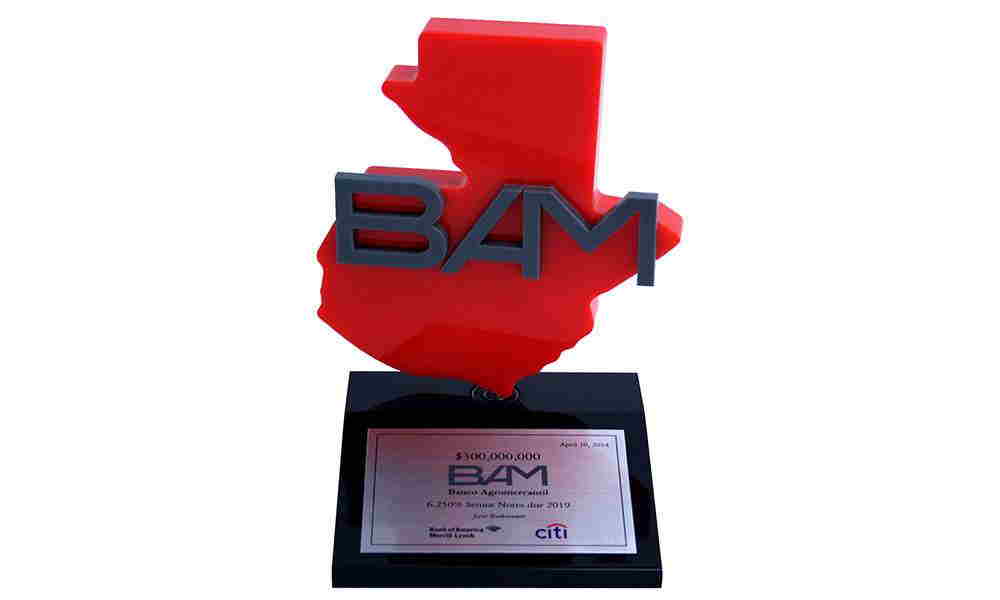 Freestanding laser-cut plexi makes this logo the centerpiece of the deal toy design, 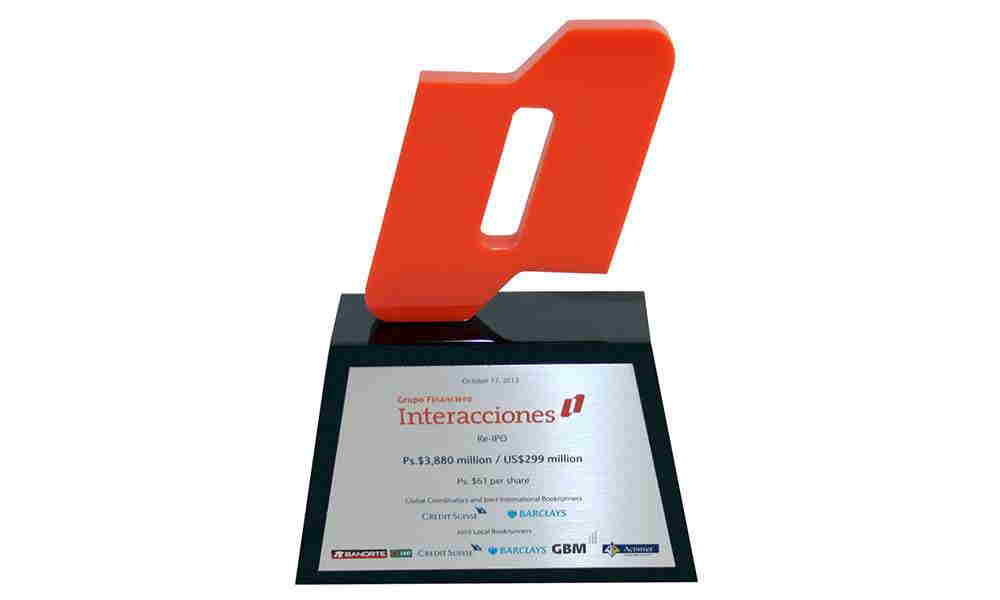 Cut plexi used to highlight an element of a logo.

The pieces shown here by no means cover all possible sources for logo-themed tombstones. At the same time, these categories can overlap with certain designs and deal toys falling into more than one.

And while shouldn’t be your responsibility to come up with deal toy ideas, it is our hope that the pieces shown here will help crystallize your thinking when it’s time to reach out to a vendor and initiate the design process. Having a concrete example of what you have in mind can save you a considerable amount of time.